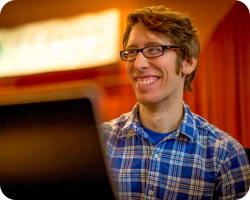 Dan is a veteran DJ with a lifelong musical obsession. He DJs because he loves sharing music, inspiring dancers, and shaping a dance night. He’s spun for events across four continents, playing for everything from international events to local dances on a weekly basis and has organized both locally and for events as their Head DJ, including BluesSHOUT! and The Blues Experiment. He’s constantly challenging himself to bring new material to his fellow dancers and works hard to offer a variety of music in his sets that stays true to the roots of the dance. He loves all styles of music and his sets tend more toward authentic Jazz and Blues, but he can bring the party if the dance calls for it. 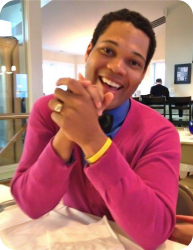 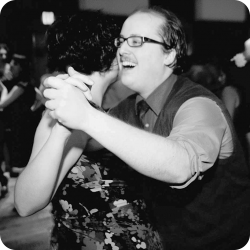 Jonathan hails from Montréal, Québec, where he took his first dance class ten years ago. The punk kid he was wasn’t into Jazz at first, but he quickly grew fond of Basie’s piano, Hampton’s vibraphone and Hodges’ alto saxophone. His music collection started growing, and he eventually started DJ locally in Montréal and Québec City. He then got more opportunities to spin his tunes out of town, appearing as a DJ in events such as Dirty Dozen Weekend and the Boston Tea Party. He’s been on the DJ team of Beantown Camp for the last five years. He started taking care of the camp’s DJ Summit which has grown into a full mini-track! 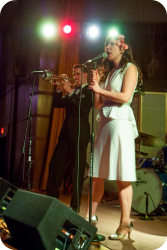 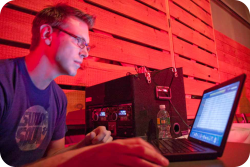 Peter will be hosting the Soul Party on Monday late night in the Lodge. The Soul Party is always a camp highlight and you don’t want to miss it! 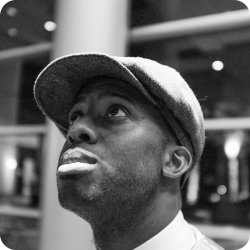 Shelby Johnson is a self proclaimed music snob who fell in love with Jazz at an early age, listening to the sounds of Louis Armstrong, Duke Ellington and Count Basie. He really fell in love with swing music in the 6th grade thanks to a music appreciation class and started playing Jazz in the 8th grade after three years in band as a drummer and percussionist at Blendon Middle School in Westerville, Ohio. At Westerville North High School, Shelby started playing the Vibraphone and would transpose his parts for most pieces as many pieces didn’t provide written music for his instrument. This developed Shelby’s ear for music that was a huge catalyst for him catching the swing dance bug in 2011 in Orlando, Florida and boy what kind of journey that has started. Two years later Shelby became one of the premier DJ’s in the Southeast being featured at exchanges in Florida and South Carolina. In 2013 Shelby moved to Dallas, TX where he continues to deliver awesome syncopated tunes for Lindy Hop, Charleston, Balboa and Collegiate Shag. Shelby’s passion for social dancing, teaching and competing landed him the 2016 Frankie Manning Ambassador Scholarship to Herrang Dance Camp where he expanded his knowledge on Jazz Dance and Music History.